“TATS CRU: THE MURAL KINGS”, is a feature length graffiti documentary, that details the story of the world famous TATS CRU; a group of Bronx-based professional muralists whose work in aerosol has changed the perception of Graffiti as art.

The film follows the world famous TATS CRU as they produce their mural for The Graffiti Hall of Fame in Harlem and prepare to uphold their title of “The Mural Kings.” Inter-cut with exclusive interviews detailing the journey that started twenty-five years ago, as three Bronx teenagers began their artistic careers by creating subway graffiti. 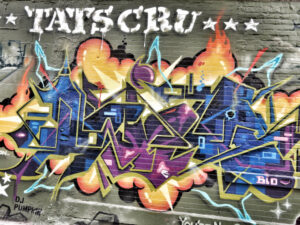